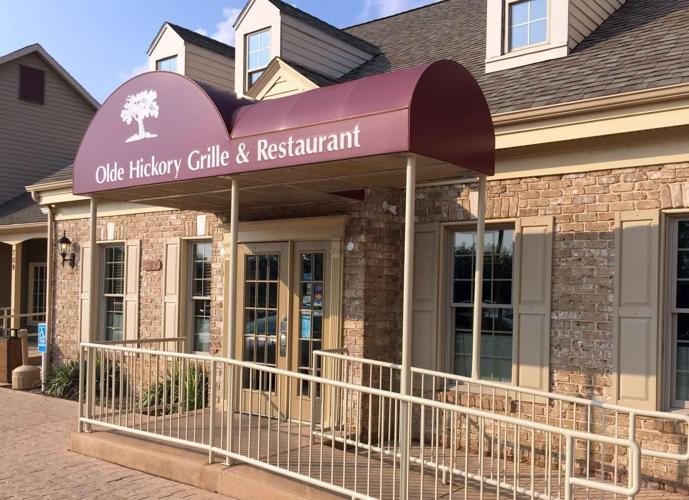 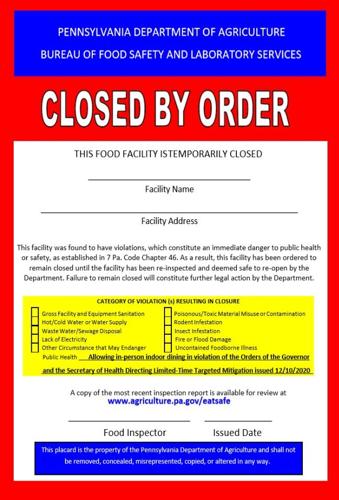 The "Closed by Notice" order used by the state Department of Agriculture for restaurants that violated the ban on indoor dining.

On Monday, Lancaster County restaurants will once again be allowed to offer some indoor dining, ending a three-week ban meant to slow the spread of COVID-19.

But instead of shutting down during the normally busy holiday season, some restaurant owners defied Gov. Tom Wolf’s three-week ban, opening their dining rooms up for customers, and themselves up to possible state sanction.

And long after dining rooms are legally allowed to be open, problems could persist for owners who violated the latest order, as they did for some who held out against mitigation efforts in the spring, and then fought extended battles in court.

“I think there’s somewhat of a misconception out there that places can fight this and nothing will happen, or if they fight it long enough, it will just go away,” said Aaron Zeamer, a Lancaster attorney who represents clients in the food service and hospitality industry.

“I think there’s a longer term risk (restaurants owners) have to weigh if they decide they’re going to stay open in the short term,” he said.

The state’s flurry of enforcement actions against restaurants that resisted the latest mandate offers a window into a regulatory system that has been willing to take aggressive action to enforce COVID-19 rules, even as it seeks conformity through less combative means.

“They’ve tried to encourage compliance instead of just coming in and immediately taking an enforcement approach,” said Zeamer, while noting temporary orders create a conundrum for agencies that could be stuck enforcing rules that no longer apply.

“How far do you push that if you’re a state agency? How many resources do you devote to it after the fact, after the mitigation period is over?” he said. “But if they don’t do anything and they don’t enforce it, it just sets a precedent to the folks out there that nothing is going to happen.”

The state Department of Agriculture has the primary responsibility for enforcing COVID mitigation efforts, but the Department of Health also plays a role and recently showed it is willing to take aggressive action.

During the three-week indoor dining ban, the state Department of Agriculture issued 74 “closure by notice” orders to restaurants that ignored warnings and continued to offer indoor dining during the ban, including 12 in Lancaster County.

Restaurants that defied the closure orders were referred to the state Department of Health, which had the option of pursuing additional legal remedies, which they did just before Christmas.

On Dec. 23, the Department of Health filed a case in Commonwealth Court through the Attorney General’s office against some restaurants that maintained indoor dining, including Olde Hickory Grille in Manheim Township.

In addition to seeking an injunction forcing the restaurants to close, the case also asks for compensatory damages for enforcing the order, punitive damages for “willful and wanton” violation of the order, and other damages “the court deems appropriate.”

A spokeswoman for the Department of Health did not respond to a question asking if the department expects restaurants that received closure orders to remain shuttered Monday, when Wolf’s ban on indoor dining ends.

Zeamer said the suit is a stark example of the state’s attempt to “coerce compliance,” especially since it begins with a higher court and includes a petition for damages.

“That suggests to me they are trying to set an example and send a message that non-compliance will be taken seriously,” he said.

In Lancaster city, a health officer who normally does restaurant inspections has also been working to ensure compliance with state-imposed restrictions meant to slow the spread of COVID-19.

“In most cases, the health officer seeks to work constructively with city businesses to ensure they are operating safely,” Jess King, chief of staff for Mayor Danene Sorace, said in an email. “In a few instances, the Health Officer has had to issue warnings. In any situation where compliance is refused, the city will refer that matter directly to the state.”

Bars and other holders of liquor licenses have another set of reasons to comply with COVID-19 mitigation orders, especially since they could be jeopardizing a liquor license worth hundreds of thousands of dollars.

Since July, the Bureau of Liquor Control Enforcement has been doing COVID-19 related checks of licensees, looking for violations that could result in $1,000 fines and which would also be considered during the biennial license renewal process with the Liquor Control Board.

Since July 1, liquor control enforcement has issued nearly 1,900 warnings and more than 400 notices of violations as part of its COVID-19 mitigation efforts. Violations have led to the suspension of roughly two dozen licenses across the state, typically for two weeks, according to Shawn Kelly, a spokesman for the liquor control board.

While violations could lead to a license being revoked, Kelly said such a measure is rare in any case. Before such an action, the board typically makes “an offer of compromise” in which they allow the license to continue, but require that it’s sold.

That’s what happened in the case of Molly’s Pub, whose owner Anthony Maglietta was convicted of assaulting a man outside the Lancaster pub in 2015, then pressured into selling his restaurant liquor license.

While the Molly’s Pub case shows that it takes a lot to actually have a license revoked, Zeamer said it’s impossible to know how the liquor control board will approach license renewal applications for restaurants that knowingly ignore COVID-19 rules.

“(The liquor control board) may be making their list at the moment and just waiting for the next renewal period, and then look to squeeze some licensees at that point,” Zeamer said.

Even outside the license renewal process that happens every two years, Zeamer says running afoul of COVID-19 rules could give liquor enforcement officers an extra reason to stop by, which is never a good idea.

“I tell most of my clients that if they come in and dig hard enough, they can usually find something to then cite you for,” he said. “They will often just dig, they will return, and continue to do inspections until they find something.”

Local communities of color are reluctant to get COVID-19 vaccine; that worries Lancaster County health officials

As the chair of the OB-GYN Department at UPMC Lititz, Dr. Sharee Livingston was among the first UPMC frontline workers to receive the Pfizer C…

After weeks of Lancaster County amassing a few hundred positive case counts per day, the county sees just over 100 new cases in the past 24 hours.

Six Lancaster County restaurants were among 36 businesses the state ordered to close for defying COVID-19 restrictions during Gov. Tom Wolf’s …

A reader in Strasburg Township needs to get his car inspected by the end of this month. But there’s a problem.

Three Lancaster County restaurants are among 24 businesses the state ordered to close last week for violations of COVID-19 mitigation requirements.

Three Lancaster County restaurants are among 15 businesses the state ordered to close last week for violations of COVID-19 mitigation requirements.

Agape Café & Grille owner grapples with customer complaints, closure order; 'I just wanted to get back in compliance'

More help is on the way for Lancaster County’s battered hospitality industry.

During nearly a year of restrictions on restaurants meant to limit the spread of COVID-19, Gov. Tom Wolf’s shutdown of dining rooms during the…

Are the COVID-19-related deaths inflated for monetary reasons? [Lancaster Watchdog]