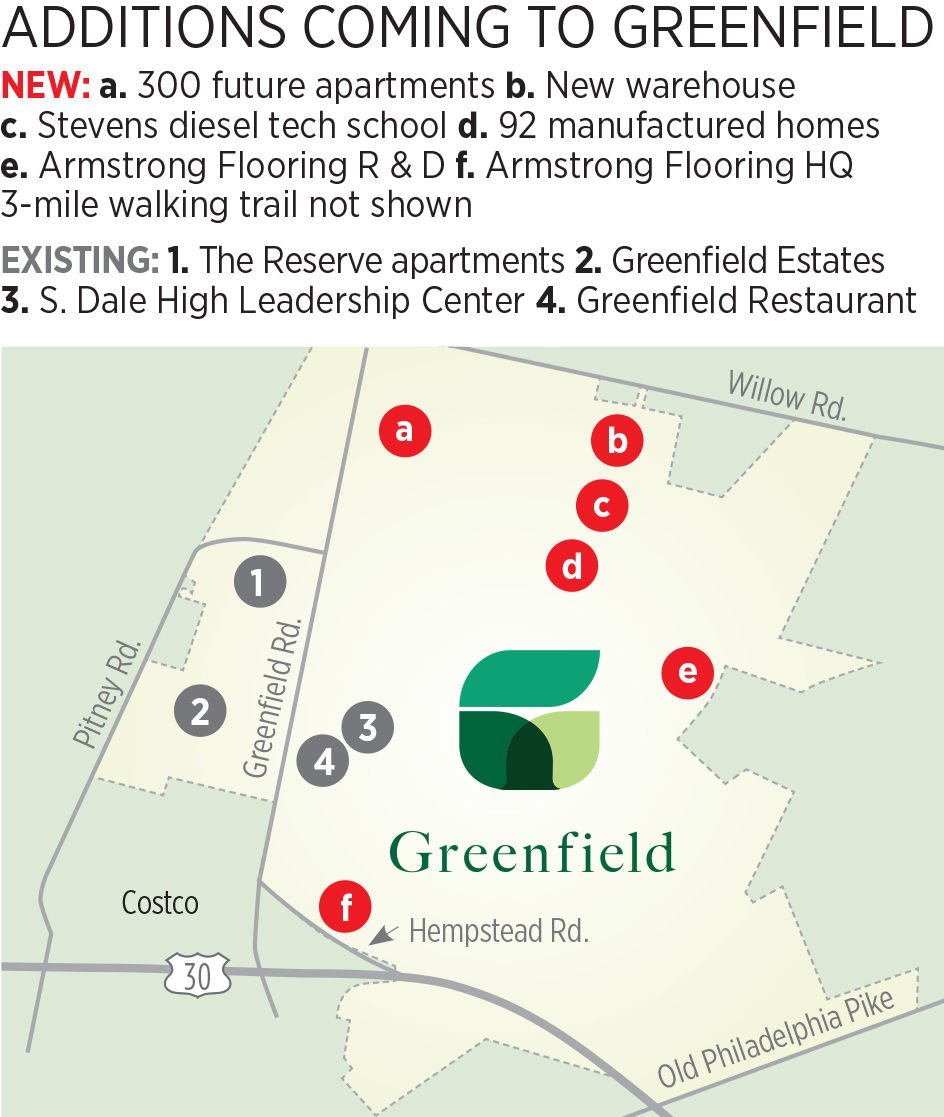 This rendering depicts the Connection Plaza at the future headquarters of Armstrong Flooring on Hempstead Road in Greenfield, formerly Greenfield Corporate Center.

This rendering depicts the Connection Plaza at the future headquarters of Armstrong Flooring on Hempstead Road in Greenfield, formerly Greenfield Corporate Center.

Lots of changes are coming to the Greenfield Corporate Center, accelerating its evolution from the county’s biggest business park to what it calls a “community-oriented hub for business, education, hospitality and residential living.”

Officials announced Thursday that the 600-acre property in East Lampeter Township is gaining six significant additions to its broad mix of uses:

-A sizable warehouse, bigger than a Walmart superstore, for up to three tenants.

-A doubling of its trail system for walking and bicycling.

High officials said they’re launching a host of activities, to begin when the COVID-19 threat diminishes, intended to foster a sense of community among its stakeholders.

Activities include having local farmers sell fresh produce there (on days that Lancaster Central Market is closed), a lecture series, yoga classes, gardening plots, food trucks, a biergarten and eventually a grocery store.

Armstrong and High are investing a combined $30 million in the conversion and rental of two underused buildings at 1740 and 1760 Hempstead Road, totaling 58,000 square feet, into Armstrong’s headquarters and a 33,000-square-foot portion of 1827 Freedom Road into its technical center.

The headquarters, to be ready next June, will have 200 corporate-office employees and the tech center, to be ready in March or April, will have 60 product development, innovation and engineering employees.

Armstrong had signed a five-year lease in 2016 for its current location on the Columbia Avenue campus owned by its former parent company. There it leases 249,500 square feet, at a cost of $5.62 million a year, according to Armstrong’s public filings at the time.

But Armstrong since sold off its hardwood division, trimming its need for space. President and CEO Michel Vermette told Wall Street analysts in March that the company was looking for a right-sized location, telling them a move would result in a drop in rent of more than 60%.

“It’s not only about finances,” said Vermette.

The company looked at five to seven possible locations before signing with Greenfield, he said, but never seriously considering leaving the Lancaster area, wary of the “disruption” it would cause.

High, meanwhile, is delighted to add a blue-ribbon tenant that will be a partner in upgrading highly visible buildings at the front of the sprawling property, just off Greenfield Road and the Route 30 bypass, company officials said.

Vermette and Mark Fitzgerald, president and chief operating officer of High Real Estate Group, said the ongoing pandemic did not deter them from pursuing the venture because they believe the outbreak – and the recession it triggered -- will be temporary.

The other projects announced Thursday, on 100 acres at the north end of Greenfield, follow last December's news that High is partnering with local and state government to build a new road to serve that area without traveling on Greenfield Road.

The $15 million project will finish part of the former "goat path" (formally named the Walnut Street Extension), then construct a new road named Ben Franklin Boulevard to take motorists to and from Greenfield's north side, as LNP | LancasterOnline reported in December.

The new road is expected to open in spring 2023.

High said it has begun going through the township’s land development plan approval process for the new apartments.

The project, as yet unnamed, is intended to help meet the area’s strong demand for rental housing. Fitzgerald said the project cost has yet to be determined. Construction is expected to begin next year.

The expansion of Greenfield’s Eastwood Village manufactured home park will make way for 92 more units, to join 279 existing homes there. Lots will become available this fall. Buyers will have a choice of three or four models as well as the option to add a garage, unlike the current homes.

Thaddeus Stevens College of Technology’s new diesel technology program will occupy a new 86,000-square-foot facility. To open in fall 2021, the program will have 150 to 200 students. Stevens will maintain its 50,000-square-foot facility at 1812 Colonial Lane in Greenfield, which hosts courses in welding, masonry technologies, and computer-aided design.

As part of Armstrong’s commitment to sustainability, the buildings will be renovated applying sustainable building practices that focus on human health and wellness, according to Armstrong and High Real Estate Group.

A plan to convert the historic downtown headquarters of LNP Media Group and adjoining buildings into apartments, offices and retail won condit…

Struggling manufacturer Armstrong Flooring disclosed Friday it will close its flooring plant near Los Angeles, idling 58 people, in the first …