In this 2018 file photo, Amazon Prime packages sit in an UPS delivery truck before being unloaded in Miami. 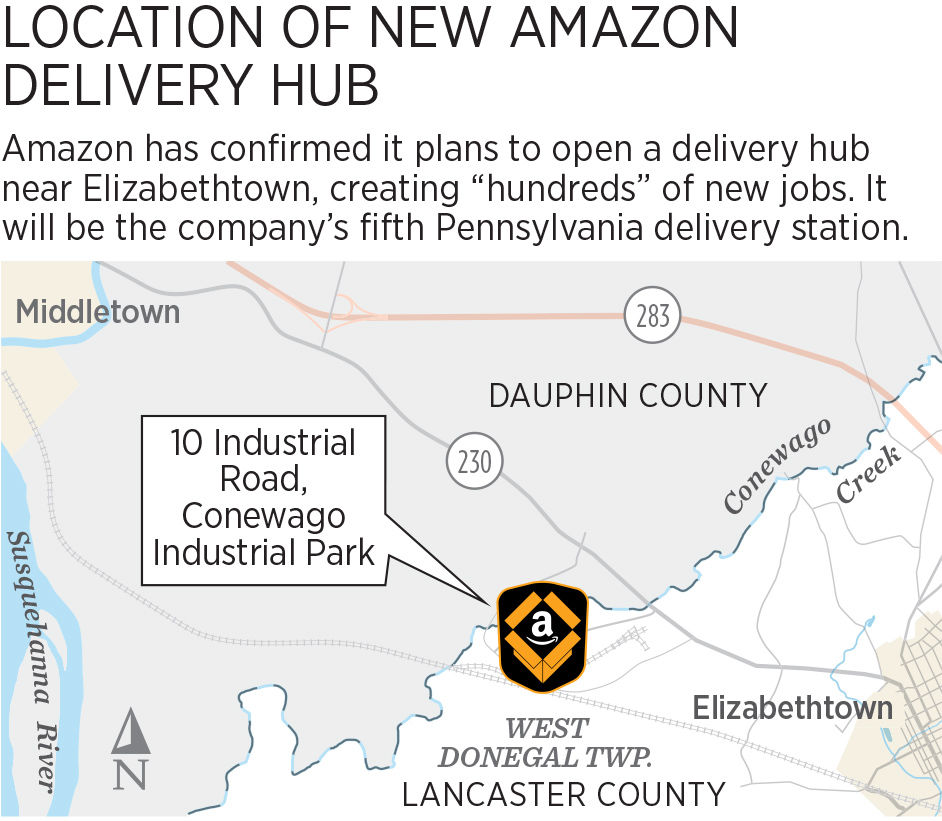 In this 2018 file photo, Amazon Prime packages sit in an UPS delivery truck before being unloaded in Miami.

Amazon confirmed Tuesday that it will open a delivery hub west of Elizabethtown, creating “hundreds” of jobs and speeding up deliveries to area customers.

Amazon said the facility will open this summer but did not provide a date.

The local project is taking shape as Amazon begins an $800 million nationwide effort to make free one-day shipping the norm for its Prime subscribers, instead of the current two-day free shipping policy.

At the same time, Amazon is continuing to develop its own delivery operation to serve all of its customers, not just its Prime subscribers, reducing its use of UPS, FedEx and the U.S. Postal Service.

The redevelopment of the West Donegal Township site has been the subject of public meetings for the past several months, though project officials have refused to publicly name the company that will open there.

But LNP reported a week ago that the mystery tenant appears to be Amazon, as the company is placing help-wanted ads for employees to work at the 10 Industrial Road site.

Amazon at the time neither confirmed nor denied it was arriving there. Now Amazon has gone public with its intentions.

“I’m not surprised they picked us," said Heather Hohenwarter, executive director of the Elizabethtown Area Chamber of Commerce.

The area is central to Lancaster, Harrisburg and York, and served by major highways — factors that also helped draw Nordstrom and Grove Collaborative fulfillment centers there recently, she observed.

On top of that, businesses that come to the area tend to stay and grow, Hohenwarter added.

How the hub works

The 81,000-square-foot building is being converted from a warehouse to a delivery hub, with nearby vacant parcels being made into parking lots for Amazon employees and contractors.

The redevelopment is being done by a Boston-based real estate investor, High Street Realty, which is buying the properties, then will lease the building and parking lots to Amazon.

In Tuesday’s announcement, Amazon described the delivery hub as a “last-mile” facility.

That means tractor trailers will bring packages from fulfillment centers, such as the one in Carlisle, to the hub. There the packages will be sorted by route and loaded onto delivery vans. The vans will delivery the packages to the residents and businesses that ordered them.

Amazon said the new hub will “speed up deliveries to customers in the metro area,” but did not quantify the improvement or specify the area to be served by the hub.

As part of its effort to recruit employees for the new facility, Amazon is mailing glossy help-wanted postcards to homes across southcentral Pennsylvania.

The mailers are pitching part-time “warehouse associate” jobs, where people would work overnight or early morning shifts of four to six hours, adding up to 15 to 25 hours per week.

These jobs would pay up to $16 per hour.

The Amazon mailers also are pitching full-time but seasonal “delivery associate” jobs, where people would drive an Amazon van on a daily delivery work.

Fuzzy on the details

Besides offering a vague opening timetable and service area, Tuesday’s statement from Amazon leaves many other details unknown too, such as how many “hundreds” of employees and contractors will work there and why Amazon chose that site for its hub.

An Amazon spokesman declined to get more specific about the operation here.

However, judging from Amazon’s business model, a tidbit mentioned at a township meeting and the site’s number of parking spaces (456), it appears likely that the hub could have anywhere from 260 to 470 employees and contract workers, and serve an area within an hour's drive of the hub.

Grisham out as press secretary, will head first lady's staff

65 counties in Pennsylvania have confirmed cases of COVID-19; watch how that happened (time-lapse)

Elizabethtown College goes back to its roots with new program [editorial]

Lancaster County’s two tallest buildings are a hotel and an office building, as the highest buildings in a community often are.

Amazon customer Susan Weaver had noticed the sudden appearance of plain white delivery vans in her Campbelltown neighborhood this fall.

A former Lancaster County mail carrier has gone to court alleging the U.S. Postal Service violated his rights by requiring that he work Sundays.