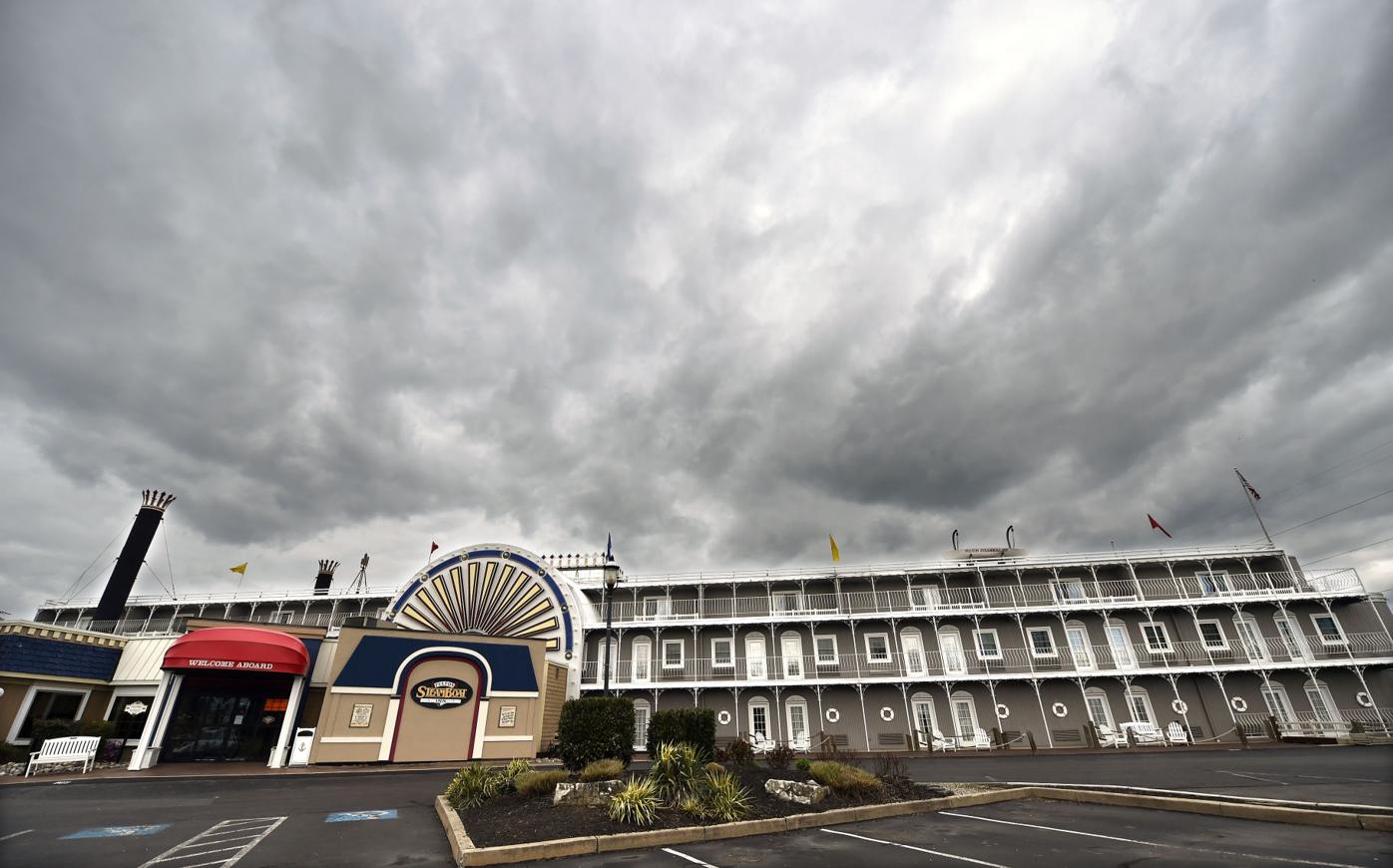 The Fulton Steamboat Inn, shown Wednesday April 1, 2020, is among at least 13 hotels in Lancaster County to close temporarily due to the COVID-19 pandemic. 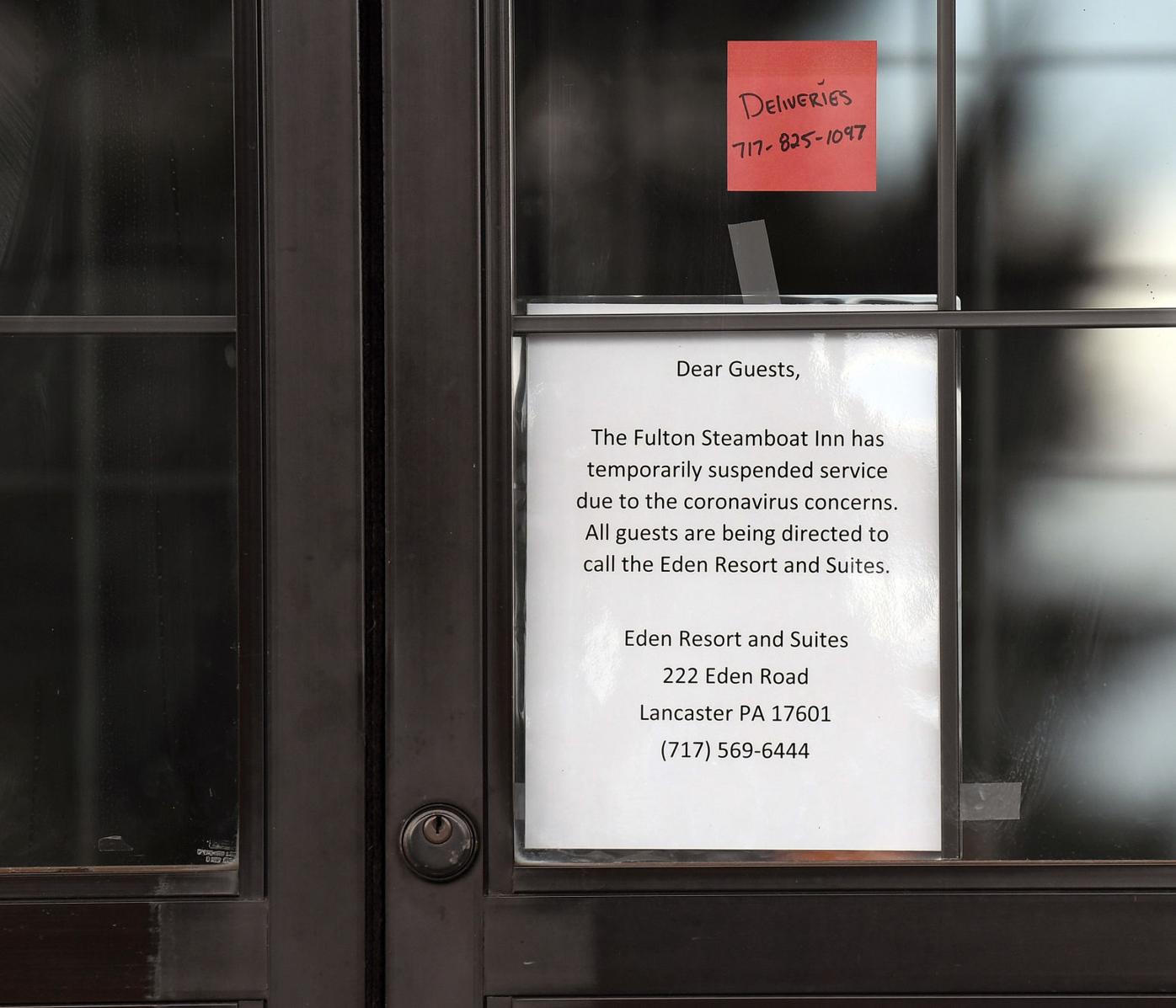 Closed due to the Covid-19 crisis the Fulton Steamboat Inn in East Lampeter Twp. Wednesday April 1, 2020.

The Fulton Steamboat Inn, shown Wednesday April 1, 2020, is among at least 13 hotels in Lancaster County to close temporarily due to the COVID-19 pandemic.

Closed due to the Covid-19 crisis the Fulton Steamboat Inn in East Lampeter Twp. Wednesday April 1, 2020.

This was shaping up to be a bounce-back year for the Lancaster County hotel industry.

Major indicators such as occupancy rates and rooms booked had pointed up in January and February, when measured against those months during a disappointing 2019, thanks to a healthy economy and reasonable gasoline prices.

Hoteliers were expecting the encouraging trend to continue, helped by the debut of a new show at Sight & Sound Theatres, “Queen Esther,” set for March 14 — always a catalyst for tourism and hotel stays.

Then, over the four weeks of March, the hotel industry’s outlook flipped from hopeful to horrific as the fast-moving COVID-19 outbreak put most of the mid-Atlantic region on shutdown.

In Pennsylvania, under Gov. Tom Wolf’s orders only life-sustaining facilities can stay open and few people can travel. Events like “Queen Esther” are postponed. Hotels, while allowed to stay open, have few guests to shelter.

“You have a couple good months and you think you’re going to have a good year, then suddenly you’re closed in a matter of days. It’s unbelievable,” said local hotelier Steve Sikking.

“Nothing in my hotel life comes close to this, and I’ve been in business since 1986. … It’s like somebody shut the faucet off almost overnight,” said Sikking, managing partner of the Eden Resort and general partner of the Fulton Steamboat Inn.

The hotels remaining open are staffed by 10% to 30% of their usual workforce, hoteliers say. A small fraction of the industry’s 3,500 employees here still are on the job.

As a result, a drive down the county's main tourist corridor, Lincoln Highway East, in early April offers the surreal sight of empty parking lots and open road.

What is sure to be the worst spring ever for Lancaster County hoteliers began with the pandemic draining away more and more business as March unfolded.

For one local family, pandemic hurts current and future hotels

For some hotels, such as the Lancaster Marriott at Penn Square, the Wyndham Resort, the Holiday Inn Lancaster, the Wilbur and the Avid, the collapse comes only months after their owners spent tens of millions of dollars to expand, remodel or construct their facilities.

How do those grim occupancy-rate statistics manifest themselves at street level? Here’s an example.

Each of the 76 rooms at the Comfort Suites on Lincoln Highway East (Route 30), opposite the Red Robin restaurant, had been reserved for Saturday, March 28. Then a pandemic-induced wave of cancellations swept over the hotel.

Rooms actually paid for and occupied? One.

“I’m getting cancellations all the way through September at this point … ,” said Sunny Desai, director of operations for PA Dutch Hotels, a family business that operates three hotels here.

The workforce at those three hotels combined has been pared from 60 to 15, a process that he called “absolutely gut wrenching.”

“If things do not turn around or more assistance (from the federal government and franchisors) is not provided, there will be more hotels closing their doors temporarily or worse, permanently,” Desai said.

At the county’s largest hotel, the 416-room Lancaster Marriott at Penn Square, which is integrated into the adjoining Lancaster County Convention Center, the hotel’s occupancy rate has plunged to the “low teens,” said Josh Nowak, director of sales and marketing director for the overall facility.

From the usual workforce of about 290 full-time and 60 part-time personnel, the facility now temporarily employs fewer than 35 people. They include some of the kitchen staff at its new restaurant, Plough, which remains open for takeout orders.

Nowak said management’s focus is on taking the immediate steps necessary to deal with the pandemic’s impact while trying to reschedule guests and events that were booked for this spring.

Part of that preparation is reaching out to guests and event organizers.

“We want to reassure our customers that we're here for them,” Nowak said.

At the Wyndham Resort, the county's second biggest hotel with 317 rooms, the occupancy rate has tumbled to zero. Co-owner Kalpesh Vakil said Wednesday that his last paying guest was a week earlier.

In response, Vakil has closed off nearly all of his rooms at the property, formerly the Lancaster Host, and trimmed the workforce from 60 to three.

He decided to keep a few rooms available "for someone traveling due to an emergency, or for utility workers or hospital staff. This way, they can serve someone's need. And anyway, we need (to be here) to answer calls and have security," said Vakil.

“Everyone’s trying to adapt, get through this and make it to the other side, to be honest,” said Diane Poillon, president and CEO of Willow Valley Associates. “Being in the middle of it isn’t fun.”

As a result, Willow Valley Associates has cut the hotels’ collective workforce temporarily by about 70%. That means 150 fewer workers at its Lancaster County properties, according to Poillon.

Willow Valley Associates is trying to cushion the blow. All the temporarily furloughed employees will continue to be covered by health insurance and other benefits. About 25 have been placed in jobs at its sister company, Willow Valley Communities.

Sikking is taking a similar approach at the Fulton Steamboat (100 rooms) and the Eden (300 rooms, third biggest in the county).

About 10 of 65 employees are still at work at the Fulton Steamboat, answering the phone to tell guests they can stay at the Eden for the same rate and performing maintenance and renovations. About 50 of 350 employees remain on the job at the Eden.

Most of those Eden workers still on the job were asked to take a 25% pay cut, said Sikking, so that the Eden could keep as many workers employed as it did.

“You can't prepare for this,” he said. “But what you can do is run a conservative business, making sure you have good reserves, solid relationships with your banking partners and hopefully, when a situation like this comes up, you’re about as good as you can be in trying to weather it.”

The future of the hotel industry is impossible to predict, given the absence of any similar scenario that could provide guidance, but the consensus view is tempered optimism.

“It’s going to be a crawl-walk-run progression,” Cliff believed, “as hopefully we do flatten and start to take the curve down, and bit by bit the precautions are lifted. Honestly, I think we’ll have a new normal at least for a while, as a society. Every business and every activity is going to feel it.”

In the meantime, Discover Lancaster is trying to “prime the pump” for the return of tourism by producing videos showcasing the appeal of Lancaster County. The goal is for this market to be “top of mind” with potential visitors, he said.

Poillon said the proven strength of Lancaster County as a tourist destination makes her optimistic that tourism here will rebound.

But she cautioned, “It’s not going to happen all at once. Things will bounce back in phases.”

Sikking believed that a slow recovery will begin by June, but it will take until 2021 for the volume of tourism to return to its previous level.

Many guests will still want the social distancing and increased sanitizing that they got used to during the pandemic, he predicted, a trend Sikking expects to last at least a year.

But ultimately, most hotels, attractions and restaurants will need crowds similar to the past to come back in order to generate the revenue necessary to repay the loans borrowed to build those facilities, he indicated.

“Without those numbers, our businesses don’t make sense. Financially, they don’t work. It’s not like most bed-and-breakfasts where you have only a few rooms and you just need a couple of guests,” Sikking said.

Highmark says it will waive deductibles etc. for COVID-19 hospitalizations after positive test

Sports TV as nostalgia: A viewer's guide for a pandemic [column]

The most amazing things about everyday life, to me, have always involved the distortions that come from our perceptions of the passage of time.

It’s not only human beings who are sheltering in place in Lancaster County.

When taking a walk is one of the few things that you can leave your house for, you inherently start to notice a lot more.

A Brethren Village resident died after testing positive for COVID-19 April 4, an email statement from the retirement community reported.

When Thaddeus Stevens College of Technology closed its dorms March 13 because of the coronavirus pandemic, 19-year-old Baird Thompson had no h…

An employee of Stauffers of Kissel Hill's Rohrerstown location has tested positive for COVID-19 April 4, the company announced in a Facebook p…

Giant supermarkets, the largest supermarket chain in Lancaster County, is rolling out additional steps to create social distancing between sho…

Can downtown Lancaster recover from its COVID-19 coma?

The prime location of Carr’s restaurant in downtown Lancaster always made competitor Dean Oberholtzer, owner of the Belvedere restaurant and b…

In the past, Lancaster County’s tourist industry usually entered the fall travel season brimming with confidence.

Local tourism expected to bounce back in Lancaster County; here's why [photos, video]

Elaine Baker, a retiree from Tennessee, recently drove with her husband, Gene, and their neighbors, Judy and Ashley Smith, to spend three days…