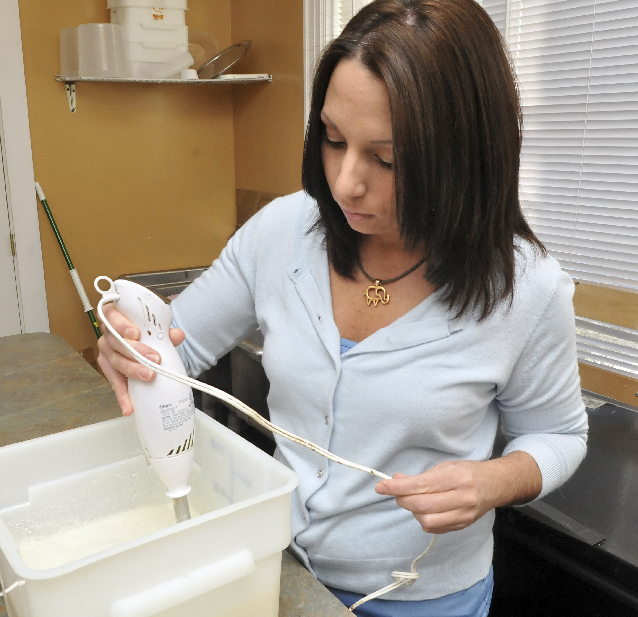 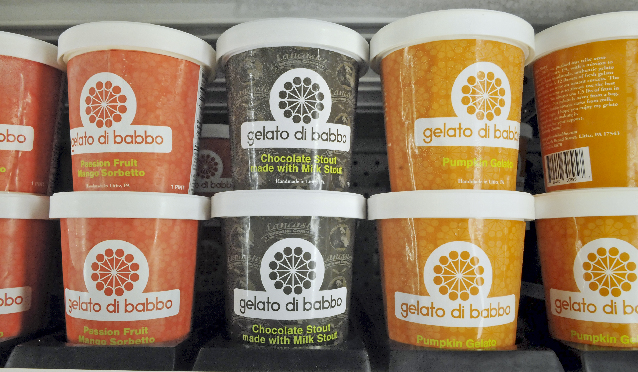 The noisy, commercial-size gelato maker in Kimberly Zanni's kitchen has whipped up a test batch of key lime in 12 minutes flat.

She pulls a lever and the pasteurized confection oozes out like cold white lava.

It's creamy and delicious, but not up to Zanni's standards.

It needs a touch more sugar, she says. "It's not as smooth as I'd like."

Time to tweak the recipe.

The whole process is a bit laborious. And its days are numbered.

That's because the gelato and sorbet enterprise that Zanni started 3 1/2 years ago is expanding rapidly.

So do stores in the Darrenkamp's Market chain, Lancaster Brewing Co. and three other eateries, in Lewisburg, Coatesville and Frederick, Md.

"Giant, of course, is extremely pleased to be offering the product" in 15 stores in Lancaster, York and Harrisburg, spokesman Chris Brand said.

The fresh, local ingredients were strong selling points, he added.

"We're looking forward to the response from our customers. And we're extremely optimistic."

"She's been sticking with [the business]," added Crills, who said SKH likes to help launch small food-related enterprises. "She's up and running now."

But Zanni can no longer work 22-hour shifts, making all the gelato in her Lititz home, she said.

Nor does she expect the Mennonite farm to be able to handle the higher summer demand.

So she's seeking a loan and looking for a property for a gelato plant.

She wants to sell up and down the East Coast, she said –– and beyond.

"I'm hoping to go, eventually, to the Haagen Dazs level."

She started out at the tricycle level.

In summer 2007, she began peddling her frozen treats from a customized three-wheeler she pushed through the Lititz shopping district.

Her success was unexpected, according to Zanni.

The Warwick High School graduate was 29 then. She had a video production company. She wasn't known for culinary skill.

"The joke was I couldn't boil water," she said.

But on trips to Naples, Italy, she'd discovered gelato, a traditional dessert made from pure ingredients, including, sometimes, snow from Mount Etna.

Gelato has less fat and a higher density than ice cream. Zanni was inspired to create her own artisan version from an old Italian formula.

She dubbed it "di Babbo" after an affectionate moniker for her young son.

She mixes in fruit from local orchards. And fresh cow's and goat's milk from the Mennonite farm.

To protect the farmers' privacy, she won't reveal their identities.

Zanni's other twist is "new crazy things." Besides churning out the tried-and-true (think chocolate), she loves to invent original flavor combinations. Such as Shoo Fly Pie gelato. And Honey Lemon Lavender.

Meanwhile, she added, "the product sells itself.

"People find me because they want something more natural that doesn't come from a [powdered mix] bag." That doesn't come "off an assembly line with all kinds of fillers and stuff."

Now another Zanni flavor is making a splash at Lancaster Brewing Co.

When Zanni approached the brewery with the idea a few months ago, Moore said, "I was real receptive to having some type of cross branding here.

"We're trying to put it on as a dessert special," Moore added. "We actually had people coming in and wanting to buy the pints, which surprised the heck out of me."

There's a glitch –– the Mennonite farmers are reluctant to make more Chocolate Stout because of the alcohol component. But Zanni said she'll work around that, possibly by using a pre-fermented version of the beer, called wort.

Just like LBC, Moore said, "she's up against some big players. She's up against national brands. She's fighting for brand recognition and shelf space."

She isn't doing it alone.

She long since has tapped into PA Preferred, a state program connecting consumers with local producers, and PAgrows, which helps agriculture-related businesses raise money.

Said Jared Grissinger, an economic development analyst with the state Department of Agriculture: "I give her a lot of credit. She really puts herself out there and goes after things."

Zanni said she's being careful not to get too far ahead of herself.

But how far is too far? Italy?

"That would be crazy," she said, then reconsidered. "I do have a large fan following in Italy right now."