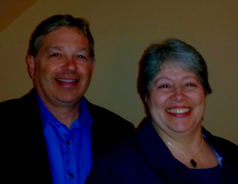 David and Saloma Furlong wrote "Bonnet Strings," about the bond they formed after she left the Amish life. 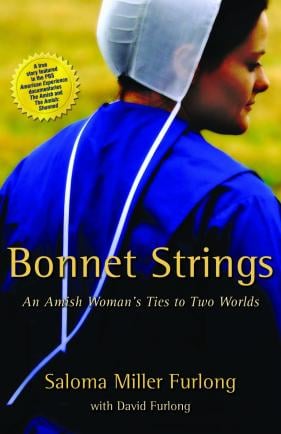 David and Saloma Furlong wrote "Bonnet Strings," about the bond they formed after she left the Amish life.

With her husband, Saloma Miller Furlong wrote a memoir about leaving the Amish. The cover of “Bonnet Strings” gives David Furlong secondary billing as an author.

Turn a few pages, though, and he becomes a true-romance hero.

David Furlong’s passionate yet patient and abiding love gave young Saloma Miller the strength to walk away from an abusive home and a culture she found contrary to her very nature.

While Saloma tells the bulk of their story, David contributed three short chapters to the book.

Now he’s joining his wife on a book tour bringing them to Lancaster County, the top location for sales of “Bonnet Strings” and Saloma Miller Furlong’s earlier memoir, “Why I Left the Amish.” (She has appeared previously in the area without her husband.)

During the Furlongs’ joint appearances on this tour, the Massachusetts couple have re-created key conversations from the book, they said by phone while on the road last week.

One involves the “mixed messages” of “Come hither,” and “Stop right there” that Saloma sent to David when he sought her out after she returned to her family’s Ohio farm, she says.

They also talk about their attraction to each other and “what it was like to be parted by the cultural divide,” she adds.

The question her husband is most often asked: Would you have joined the Amish to be with Saloma?

His wife, featured in two PBS documentaries on the Amish, said in a prior interview that the former Catholic saw similarities between the Amish life and Benedictine monastic rule.

And as it turned out, he gave up his own religious tradition to find one more suited to both their needs, he says. (They’ve attended Presbyterian and Congregational churches during their three decades of marriage.)

As unusual as their story is in its particulars, David Furlong says it also is “in many ways ... universal, and people can relate to our experience.”

According to his wife, “Having David integrated into the talk is adding such an incredible emotional perspective.”

At the end of one event, reading a passage from their book in which she finally realizes what David means to her, she spotted a woman in the audience wiping tears from her eyes.

Afterward, she says, the woman came up and told her, “It’s a love story.”

“Love is our true destiny. We do not find the meaning of life by ourselves alone — we find it with another.”

The couple will read from, discuss and sign their Herald Press book from 10 a.m. to noon Saturday, April 5, at Barnes & Noble Booksellers, 1700-H Fruitville Pike.

Jo-Ann Greene edits the Books section for Lancaster Newspapers. She also blogs about authors and their work atÂ Off the Shelf. She can be reached atÂ jgreene@lnpnews.comÂ or (717) 481-7306. You can also followÂ @LancasterReadsÂ on Twitter.