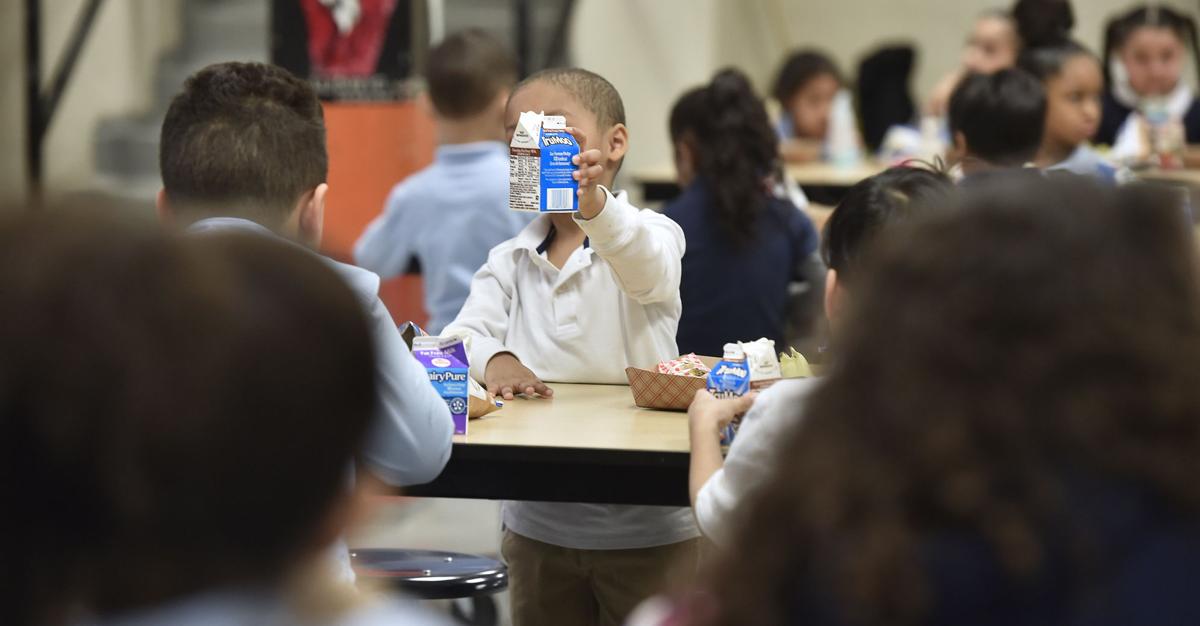 A Wickersham Elementary School student shows off his milk during lunch on Tuesday, February 11, 2020. The 2020 census count will affect how free lunches will be determined. 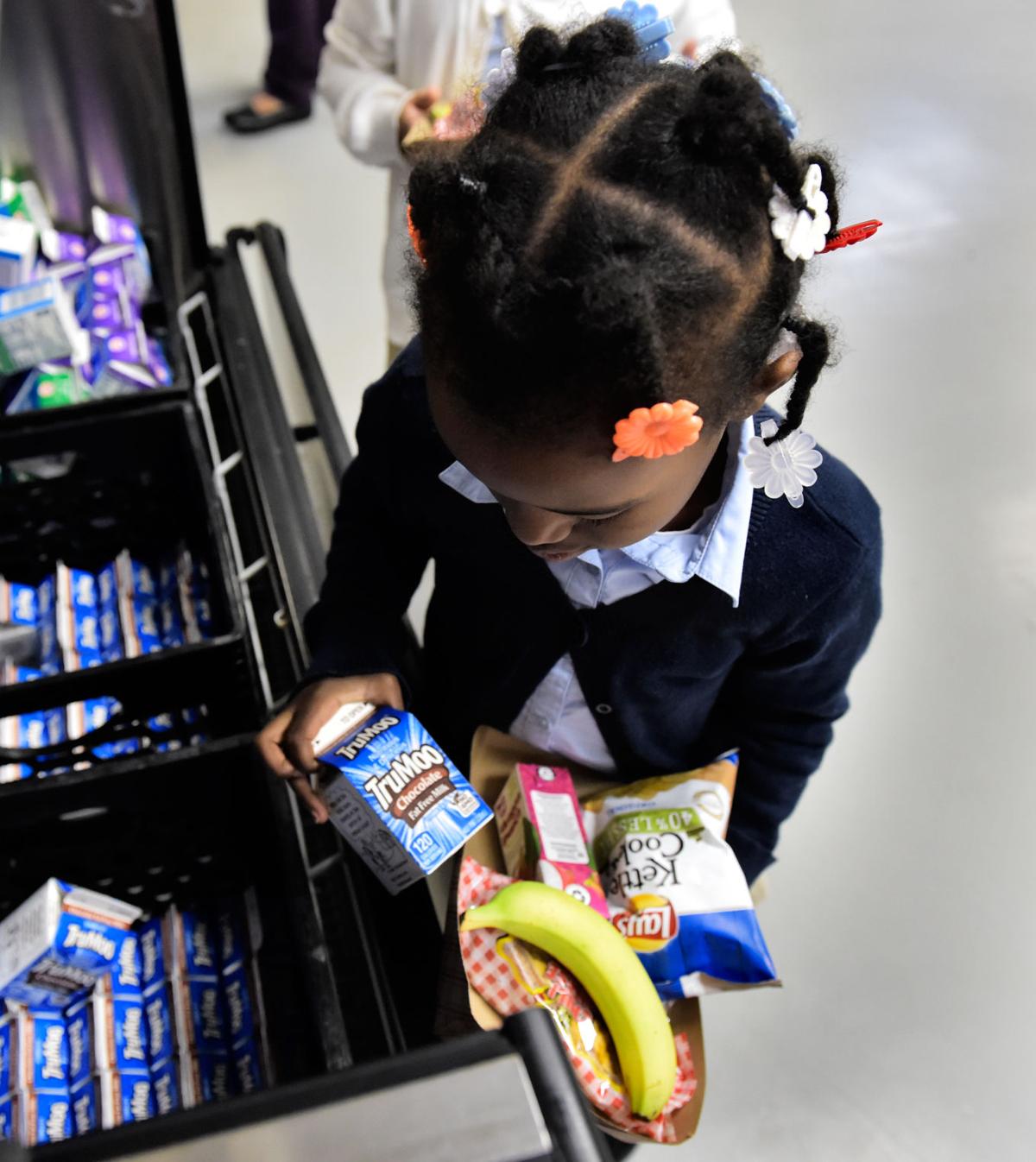 A Wickersham Elementary School student grabs her milk during lunch on Tuesday, February 11, 2020. The 2020 census count will affect how free lunches will be determined. 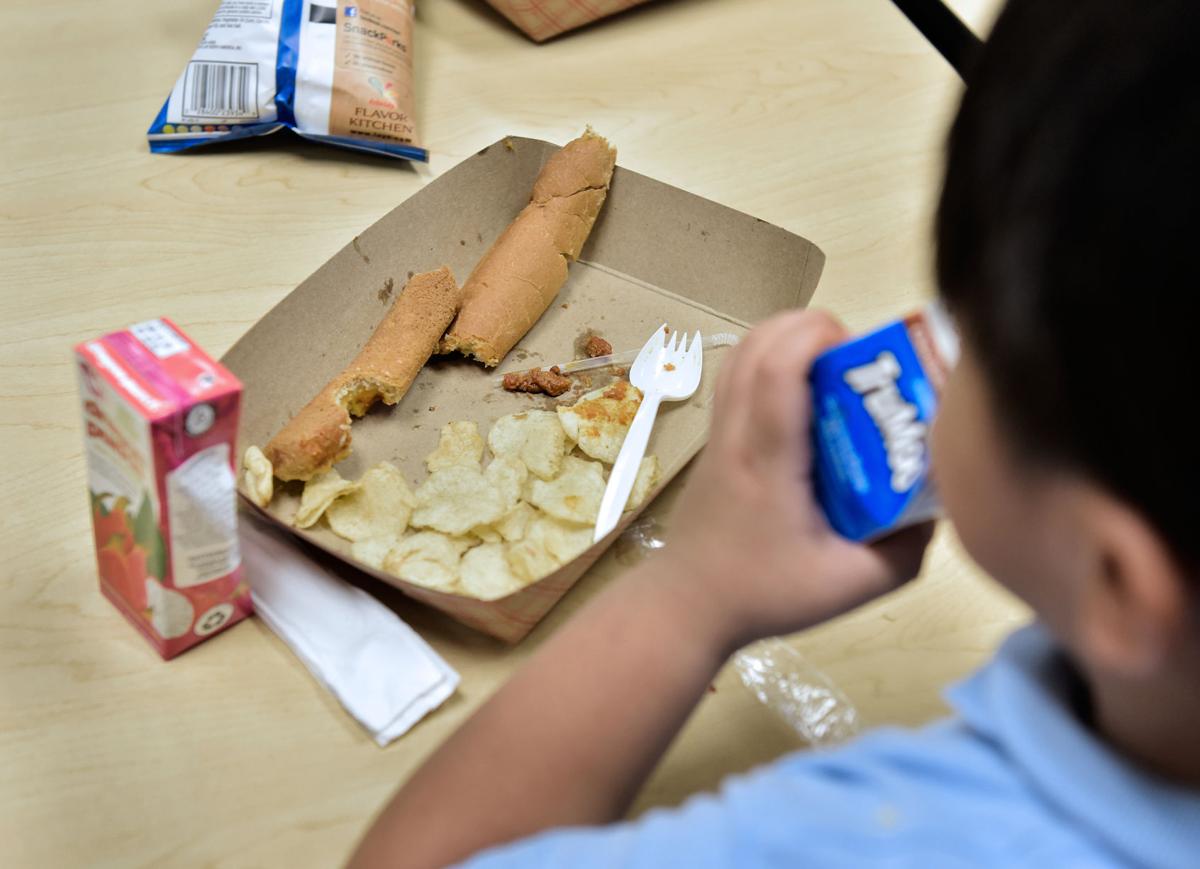 A Wickersham Elementary School student eats his lunch on Tuesday, February 11, 2020. The 2020 census count will affect how free lunches will be determined.

A Wickersham Elementary School student shows off his milk during lunch on Tuesday, February 11, 2020. The 2020 census count will affect how free lunches will be determined.

A Wickersham Elementary School student grabs her milk during lunch on Tuesday, February 11, 2020. The 2020 census count will affect how free lunches will be determined.

A Wickersham Elementary School student eats his lunch on Tuesday, February 11, 2020. The 2020 census count will affect how free lunches will be determined.

A salesperson trying to navigate the flow of traffic on Route 30.

A Marietta homeowner who relies on the borough’s upgraded public sewer system.

Any uninsured resident who turns to Lancaster County’s State Health Center for a free flu shot.

All of these people count on the census — as does pretty much anyone who takes advantage of a public service, from schools to job training to farm programs to hospital stays.

Population figures collected during the once-per-decade count, which starts April 1 in most areas, will determine how many seats Pennsylvania gets in Congress and how those are apportioned.

But an account of where people live and other data also will inform how federal, state and local governments spend their money starting in 2021 and over the next 10 years.

Pennsylvania receives about $26.8 billion each year through federal funding streams, or roughly about $2,000 per person counted in 2010.

“So for every person not counted, the county loses about $2,000 a year, which equals $20,000 over 10 years,” says Alice Yoder, executive director of Community Health for Penn Medicine Lancaster General Health. “This can have major funding impacts on road repairs, education programs, human services and infrastructure.”

Yoder co-chairs one of several subgroups that make up Lancaster County’s Complete Count Committee, which aims to ensure effective outreach and an accurate count this year. Yoder’s job is to reach hard-to-count populations, which are often the very people who most depend on services whose funding levels are driven by a population count.

In focus in 2020 are young children, people of color, lower-income residents, those with limited internet access, people who rent or share homes with others, the elderly, Plain sect communities and immigrants.

The last census, Yoder says, informed LGH’s planning for physical growth and services. Other health and social services organizations do the same.

“When you find the population might be growing, that’s when you start looking at what you’re doing,” she says.

The county now has three federally qualified health centers, which provide care to the uninsured or underinsured in at least seven locations. Those kinds of facilities — for which Pennsylvania received $116.3 million in 2016 based on previous census data — can also serve migrants, the homeless and public housing residents.

The Hard-to-Count subcommittee is working with partners that already have relationships with those populations, hoping the trust they’ve built will get residents to understand that truthful participation in the census is fundamental to sustaining local services.

It’s a tactic shared by the School District of Lancaster, which is the county’s largest district and the one that serves the most economically disadvantaged students. The district will be working with Head Start and church partners to promote census completion. In February, principals started sharing details and tips with families, and the information will be available in multiple languages.

Special education services, which are expanding to meet need, netted the district $2.2 million in federal funding last year, which goes largely toward the cost of higher staff ratios in designated classrooms.

The district also received $6.3 million in Title I funding, which supports staffing, parent engagement, intervention and professional development programs. About $650,000 in Title II funding helps to keep class size to around 25 in kindergarten classrooms, while $400,000 in Title III money offsets costs of the district’s 75 teachers for English language learners — who speak 60 different languages at home.

“These are our most at-risk populations,” Rau says. “Every single dollar we get based on the census, it really impacts real-life children. We want our families to understand that.”

For Rau and others, it’s critically important that census-takers understand their answers are protected — with no identifying information available to noncensus officials for 75 years. Despite early debate about a citizenship question, none appears on the final set of questions to be distributed.

Investing in the count

SDL is investing its own money in outreach and providing computers for those who can’t complete online forms at home.

Officials there aren’t the only ones who see a potential return on investment.

“It’s not really all about the dollar amount but understanding why it matters,” says Heather Valudes, another committee member and community impact director for the Lancaster Chamber. “How are we making this a community that we want to live in, be in, work in?”

She sees statistics gathered through the census as a rich resource for those educating future Lancaster County workers and making sure the community remains attractive to employers. Businesses need educational and job training programs that supply skilled labor, while they also need infrastructure that makes it possible to move their people and their products at a reasonable cost and in good time.

“It’s important we have the federal dollars that match what our needs are,” Valudes says.

Transportation dollars are linked to the census through multiple programs, including highway planning and construction funds (almost $2 billion for Pennsylvania in 2016) and transit formula grants ($524 million in 2016).

Community block grants can help communities revitalize their Main Streets or expand utilities to support new development. Meanwhile, career and workforce development programs rely on significant federal funding to stay solvent and grow. The Chamber has reached out to professional organizations to emphasize the message to members and workers (even with paycheck messaging) and encourage participation.

“We all need to work together to make sure the message gets lifted up,” Valudes says.

Here's how to make a no-sew face mask

Police identify woman who who slapped, yelled at Shady Maple customers for not social distancing

Releasing inmates early from Lancaster prison amid coronavirus a 'moral decision'; not a get-out-of-jail-free card: Judge

The U.S. Census Bureau has suspended operations for at least two weeks to help prevent the s…

Surprise! These five programs are affected by the census too

The GW Institute of Public Policy at George Washington University looked at how census data influenced allocations of 55 federally funded programs in Pennsylvania. The following were among those whose 2016 funding amounts (shown below) were linked to the 2010 census.

• Meals on Wheels and other senior nutrition services (Health and Human Services ): $31. 1 million.

School District of Lancaster's 11K students are about to learn online. But first, they need laptops

Planning online instruction for 11,000 students, about half of which lack sufficient access to technology, is no easy task.