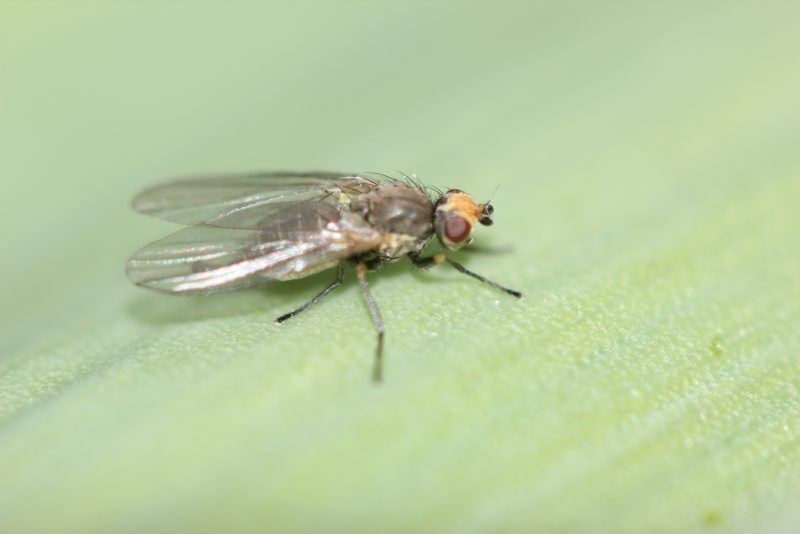 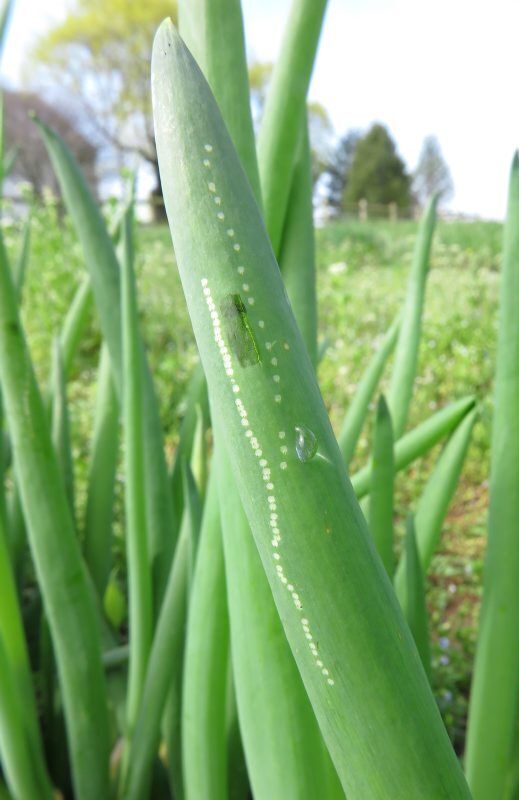 Allium leafminer is an invasive insect from Europe that found its way to North America in December 2015.

Since that first U.S. sighting in Lancaster County, Pennsylvania, ALM has spread to surrounding states and has caused damage and even total crop loss on fields of vegetables in the allium family, including spring onions, garlic and leeks.

We have been studying this insect since 2016 to understand its biology and provide management recommendations.

ALM has two flights per year (spring and fall) and each flight lasts from four to eight weeks. I have observed that ALM does not always appear in damaging numbers in any given field. One season a grower will have a high population, and the next will see only sporadic damage. Unfortunately, there is no way to predict what the population will be at any given location, so allium growers need to scout their crops and apply appropriate control measures as needed.

The flies are about quarter-inch in length and have a distinctive yellow-orange coloration on the head.

Leaf damage appears as a series of round white spots, usually near the tip of a leaf. The female fly makes this damage with the body part used to lay eggs in the leaf. Both male and female flies first feed on sap from these damaged areas, and about one week later the first eggs are laid. There can be various numbers of spots on a leaf, as few as four or five all the way up to two dozen, but they will always be in a straight line. No other insect in our area makes these kinds of marks on a leaf.

When the eggs hatch, the larvae tunnel in the leaf and head down to the stem. The larvae will then pupate in the stem or on the soil surface outside the plant until the September, when adults emerge for the second yearly generation.

The cycle repeats in the fall and the pupae overwinter in plant debris or near the soil surface and adults emerge again the following spring.

Crop loss occurs either directly from larval feeding or from market rejection because of the larvae present in the stems. In addition, plants damaged by larval feeding are susceptible to secondary infections by fungi and bacterial rots.

This Year's Emergence is Right Around the Corner

As I said earlier, any allium crop is at risk for damage or loss from this insect. Dr. Shelby Fleischer from Penn State has developed a degree-day model to predict the spring emergence of ALM that we have been testing the last few years. While the model is not ready for release, it was fairly accurate in predicting emergence the last two years.

When he ran the model for this year, it predicted emergence around April 8 in the Lancaster area.

Since that model was run we have had some unusually warm weather, so I will not be surprised if I see flies a little earlier as I scout. At this point, my recommendation is that any producer planning to use row covers to protect their allium crops should scout to be sure no ALM are in their field and then cover your crops immediately.

Growers planning on using insecticides to control ALM should begin scouting soon to determine the need for control measures. Consult the 2020-21 Mid-Atlantic Commercial Vegetable Production Recommendations for labeled insecticides to control allium leafminer. Studies conducted in Pennsylvania and New York show that Scorpion, Exirel and Radiant have given excellent control of this insect. Be sure to follow label directions for applications to your crops.

Entrust has been the best organic control option (besides row covers).

The tank mix for whatever chemical you choose to apply should include a spreader-sticker as all alliums have upright, waxy leaves that can make coverage difficult.

Based on field studies, we are beginning to feel that weekly insecticide applications are not needed to control damage from ALM, especially when systemic insecticides are used, but there are no recommendations on this method of management yet.

I mentioned that I scout for ALM in the spring and fall, and weekly updates on allium leafminer based on my observations can be heard by calling 1-800-736-6476. Select vegetables (No. 1) and then select alliums (No. 2) to hear the report. This message will be updated weekly during the spring and fall flights.

The normal duration of adult flight is five-seven weeks for both the spring and fall generations of ALM. Control measures only need to be applied during the periods when adults are active.

Onion Maggot Also on the Horizon

Weeds, Worms Begin to Appear: Are Your Alfalfa Fields Ready?

Last season I visited a grower who had a severe infestation of onion maggot.

This is another spring allium pest that is not always seen on a farm, but when present can cause moderate to heavy damage to a crop. Most often I see damage to transplants. The female fly lays her eggs at the base of transplants, and maggots emerge from the eggs and tunnel into the stem or base of plant.

Maggot feeding often results in the death of the plant, or in many cases secondary fungal infection and then death of the plant. Deformed plants that do survive are weakened and will generally not form a marketable bulb.

Watch for flowering of yellow rocket, a common weed in our area, as an indicator that onion maggot flies are active. In my experience, patches of plants about 4-6 feet in diameter are generally affected in a field — probably the result of a single fly’s activity — but under heavy fly pressure significant amounts of transplants in a field have been killed.

A major problem with onion maggot is that by the time you see the damage, it’s too late to apply control measures.

Ants, ticks and fleas, oh my: How to avoid springtime pests, plus a recipe for ant bait

As the weather warms up, ants, ticks and fleas are on the move. Here’s what you can do to fight back.